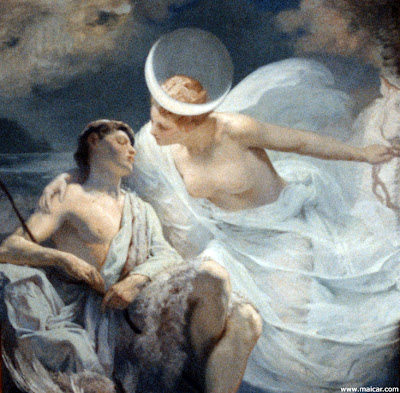 Homeric Hymn 32 to Selene (trans. Evelyn-White) (Greek epic C7th - 4th B.C.) :
"And next, sweet voiced Mousai (Muses), daughters of Zeus, well skilled in song, tell of the long-winged Mene (Moon). From her immortal head a radiance is shown from heaven and embraces earth; and great is the beauty that ariseth from her shining light. The air, unlit before, glows with the light of her golden crown, and her rays beam clear, whensoever bright Selene having bathed her lovely body in the waters of Okeanos, and donned her far-gleaming raiment, and yoked her strong-necked, shining team, and drives on her long-maned horses at full speed, at eventime in the mid-month: then her great orbit is full and then her beams shine brightest as she increases. So she is a sure token and a sign to mortal men. Once Kronides [Zeus] was joined with her in love; and she conceived an bare a daughter Pandeia, exceeding lovely amongst the deathless gods. Hail, white-armed goddess, bright Selene, mild, bright-tressed queen! And now I will leave you and sing the glorious of men half-divine, whose deeds minstrels, the servants of the Mousai, celebrate with lovely lips."

SELENE was the Titan goddess of the moon. She was depicted as a woman either riding side saddle on a horse or in a chariot drawn by a pair of winged steeds. Her lunar sphere or crescent was represented as either a crown set upon her head or as the fold of a raised, shining cloak. Sometimes she was said to drive a team of oxen and her lunar crescent was likened to the horns of a bull. Selene's great love was the shepherd prince Endymion. The beautiful boy was granted eternal youth and immortality by Zeus and placed in a state of eternal slumber in a cave near the peak of Lydian Mount Latmos. There his heavenly bride descended to consort with him in the night.

Pausanias, Description of Greece 3. 26. 1 (trans. Jones) (Greek travelogue C2nd A.D.) :
"From Oitylos to Thalamai [in Lakedaimonia] the road is about eighty stades long. On it is a sanctuary of Ino and an oracle. They consult the oracle in sleep, and the goddess reveals whatever they wish to learn, in dreams. Bronze statues of Pasiphae and of Helios (the Sun) stand in the unroofed part of the sanctuary. It was not possible to see the one within the temple clearly, owing to the garlands, but they say this too is of bronze. Water, sweet to drink, flows from a sacred spring. Pasiphae is a title of Selene (the Moon), and is not a local goddess of the people of Thalamai."

From: Theoi (for more about Selene and her role as goddess of the moon, lunacy, etc see this link)

In Greek mythology, Selene (Greek Σελήνη [selɛ̌ːnɛː] 'moon'; Doric Σελάνα; Aeolic Σελάννα) was an archaic lunar deity and the daughter of the Titans Hyperion and Theia.[1] In Roman mythology, the moon goddess is called Luna, Latin for "moon".

The etymology of Selene is uncertain, but if the word is of Greek origin, it is likely connected to the word selas (σέλας), meaning "brightness".[2]

In post-Renaissance art, Selene is generally depicted as a beautiful woman with a pale face and long, lustrous, black hair; riding a silver chariot pulled by either a yoke of oxen, a pair of horses, or a pair of serpentine dragons. Often, she has been shown riding a horse or a bull, wearing robes with a moon on her head and carrying a torch.

In the traditional pre-Olympian divine genealogy, Helios, the sun, is Selene's brother: after Helios finishes his journey across the sky, Selene, freshly washed in the waters of Earth-circling Oceanus,[4] begins her own journey as night falls upon the earth, which becomes lit from the radiance of her immortal head and golden crown.[4] When she is increasing after mid-month, it is a "sure token and a sign to mortal men." Her sister, Eos, is goddess of the dawn. Eos also carried off a human lover, Cephalus,[5] which mirrors a myth of Selene and Endymion.

As a result of Selene being conflated with Artemis, later writers sometimes referred to Selene as a daughter of Zeus, like Artemis, or of Pallas the Titan. In the Homeric Hymn to Hermes, with its characteristically insistent patrilineality, she is "bright Selene, daughter of the lord Pallas, Megamedes' son."

Selene's main symbol was the crescent. Animals that were associated with her were the Greek kyon (κύων, dog in Ancient Greek), the bull (& the cow), as well as the cock. These animals were Selene's followers during the night and the morning twilights.

Symbol or Attributes of Selene: The moon, especially in its crescent form. A chariot drawn by a horse or oxen, and, sometimes, a torch.

Selene's Strengths:Has the power of giving sleep; lights the night. Has control over time.

Selene's Weaknesses: Changeable, like the moon itself, or so hates change she brings things to a stop, as in the story of Endymion.

Selene's Parents:Probably Helios and Euryphaessa, whose name may be Minoan. Also given as Hyperion and Theia. Helios is sometimes said to be her brother as well. She is considered to be one of the The Titans rather than one of the Olympians, but later stories sometimes give her Zeus as her father.

Selene's Spouse: Was seduced by the god Pan, who gave her the gift of a white horse or, alternately, a pair of white oxen. Loved Endymion, perhaps too well. See below.

Selene's Children:Fifty daughters, the "Menes" or months, by Endymion. There were fifty months between the Olympic Games.

Some Major Temple Sites for Selene:Selene did not generally have temple sites of her own. She is said to have kept Endymion in a cave on Mount Latmus in Caria.

Basic Story:Selene, the goddess of the Moon, falls in love with Endymion and unites with him, bearing him fifty daughters. She so loves him she cannot bear the thought of his eventual death, so she uses her magics of the night to put him into a deep sleep forever. This way she may see him, unchanging, for all eternity.

Interesting Fact: Selene is believed to be an earlier moon goddess than Artemis, who in some ways replaced her. Among the Romans, Selene was known as Luna.

Selene, the moon goddess, is known for her countless love affairs. The most famous of her loves is the shepard Endymion. Other affairs of Selene's include involvement with Zeus with whom she had three daughters, and Pan who gave her a herd of white oxen. Some sources report that the Nemean lion, which fell to the earth from the moon was the result of an affair of Zeus and Selene. She was involved in many love affairs, however, not as many as her sister, Eos, the dawn.

She resembles a young woman with an extremely white face who travels on a silver chariot drawn by two horses. She is often shown riding a horse or a bull. Selene is said to wear robes, carry a torch, and wear a half moon on her head. She was not one of the twelve great gods on Olympus, however she is the moon goddess. After her brother Helios completes his journey across the sky, she begins hers. Before Selene's journey across the night sky she bathes in the sea.

Selene's parents are the Titan Hyperion, the sun god, and Theia, the sister of Helios. Some sources report that she is the daughter of the Titan Pallas, Helios, or Zeus. Helius, who is the sun god as well as his father Helios, is the brother of Selene. Eos, the dawn, who is known for her numerous love affairs is the sister of Selene.

The seduction of Endymion is the love affair that brings Selene the most fame. She fell in love with the shepard, Endymion, and seduced him while he lie sleeping in a cave. Some sources say Endymion was a king or a hunter, rather than a shepherd. Her seduction of Endymion resulted in the birth of fifty daughters, one of which was Naxos. Since Selene was so deeply in love with Endymion she asked Zeus to allow him to decide his own fate. Zeus granted Selene's request, and Endymion chose never to grow old and to sleep eternally. However, Endymion's eternal sleep did not prevent him from Selene giving birth to his daughters. Endymion was visited by Selene every night and kissed by her rays of light.

Selene is a favorite of many poets, especially love poets. A moonlit night brings the feeling of romance. It is said that Selene's moon rays fall upon sleeping mortals, and her kisses fell upon her love, Endymion.